The Governor, Arabela Carreras, presented today the candidacy of San Carlos de Bariloche as the venue for the Specialized Expo 2027 at the General Assembly of the International Bureau of Exhibitions (BIE) in Paris, by means of a message.

General Assembly of the International Exhibitions Bureau in ParisCrédito: Government of Río Negro

As the Governor, the Chancellor, Santiago Cafiero, attended the event by means of a pre-recorded message. Marcela Losardo, Ambassador to Unesco; Laura Totonelli, Executive Director of the Cordillera Development Agency (representing the Province) and Gustavo Gennuso, Mayor of Bariloche, were part of the national delegation in the French capital and made presentations to the authorities of the BIE.

Both this candidacy and the project that supports it are the result of the work of three jurisdictions (Municipal, Provincial and National) of different political origins, working together to make this Expo a true State policy.

Bariloche 2027 Bid Committee includes the Municipality of San Carlos de Bariloche, the Government of Río Negro and the Ministry of Foreign Affairs, International Trade and Worship of the Argentine Republic. 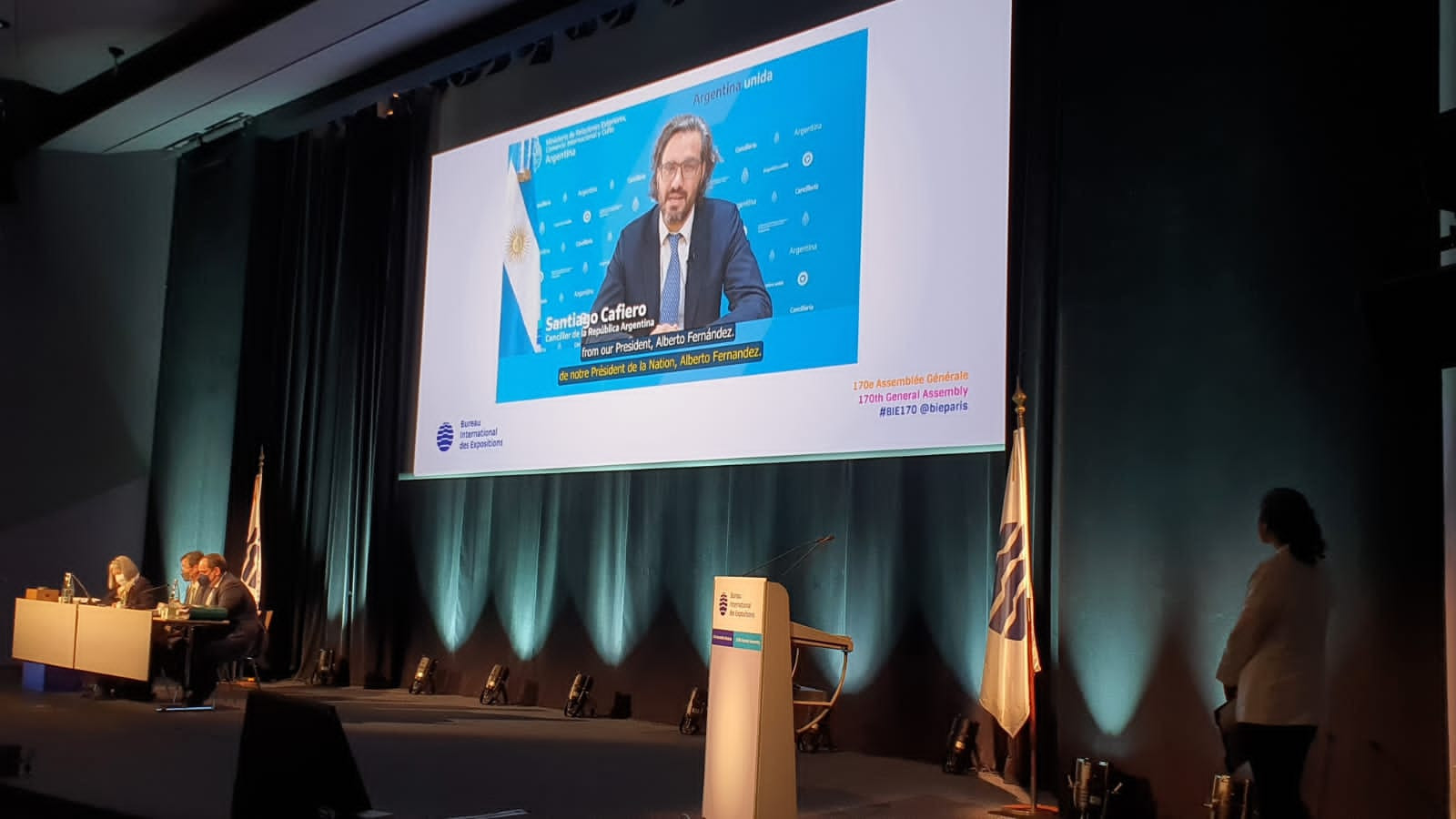 In his message, Chancellor Cafiero emphasized that this application "is part of a State project that is beyond the scope of this administration; it is a dream that connects all citizens. Argentina hopes to be able to realize the dream of organizing an Expo for the first time in Latin America. We believe that our country, our region, our people both deserve and need the opportunity to be part of this history".

The subject presented is "Nature + Technology. A new beginning". Expo 2027 Bariloche will be the ideal moment and environment to review history and build a new opportunity. A world that has men and women at the center; human energy taking its place in nature and, at the same time, creating and making use of technologies that allow real advances in the quality of life and well-being of the population. The concept of "Human Energy" is a key point, since Rio Negro is the main scientific and technological center of the region.

“We chose as our main topic an urgent issue that is current today and will continue to be current in 2027," said Cafiero. The planet needs a new beginning; humanity needs it. A sustainable, inclusive change that considers development and growth, the environment and people, as well as majorities and minorities. We believe that Bariloche, in the mystical and wonderful Patagonia, is the ideal place to meet and get down working. A continent of peace, a continent to make the opportunities that are presented to us a reality."

This candidacy and the Expo 2027 Bariloche project consolidate the legacy project in the city, thus consolidating the purpose of "the city of knowledge and development". This project means the involvement of all the actors of the educational system of the region, the technological network and the scientific community, in order to build an area of human development linked to the training of new generations in study and research.

Governor Carreras highlighted that the world "is going through a very deep energy crisis in the context of climate change, which is showing its consequences in different regions of the world and in this context Argentina has decided to take a leading role in the production of renewable energies".

"We estimate that by 2027 we will be producing green hydrogen on a large scale, an energy alternative of great importance in the context of the global energy transition," he said. "That is why we have decided to propose our city to be the venue for this great debate on the use of technologies to protect the environment, to improve the quality of life of the world's inhabitants," he concluded.

During her presentation to the BIE, Ambassador Losardo emphasized that "this candidacy will bring about a true revolution in cultural, educational and scientific matters for the entire region of Patagonia." "We want this candidacy to express not only our country but the entire region, and that this may finally be the first exhibition in the Latin American continent," he added.

"We need a plan B to put Science, Technology and Innovation at the service of the people. A new beginning that allows us to satisfy basic needs in an environmentally friendly way," explained Totonelli.

"We are proud to have a wide network of educational, research and development institutions that make us the city with more technologists and scientists in the South American region per hundred thousand inhabitants," concluded Mayor Gustavo Genuso.